Home / Description of the structure and functions of spine / How does the sacral part of the spine in humans?

How does the sacral part of the spine in humans?

Sacral part of the spine based on 5 vertebrae. They are characterized by a certain numbering, from S1 to S5. At the core of spine is a vertebra 34, located in close proximity to each other. Together they represent the spine, which, in turn, forms the basis of the human skeleton. Between the vertebrae are disks.

What is the base of your spine

To date, we developed a special division under which were allocated to 5 main parts of the human spine. Each of them has its own designation. The vertebrae are numbered from top to bottom.

At the base of the spine lies a few main sections. Among them include:

The Neck consists of 7 vertebrae key. The numbering starts with C1 and ends at C7. In this case the occipital bone to take count zero. In medical literature it is referred to as C0. The main feature of this division is the increased mobility. 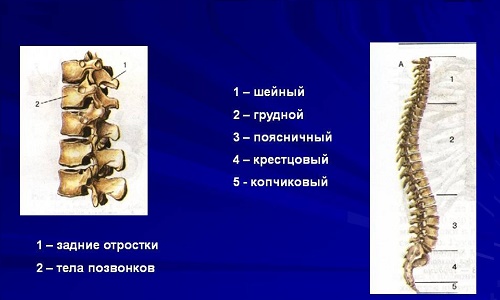 The Breast area. It includes 12 main vertebrae. According to their numbering is equal to T1-T12. In some cases, to refer to the vertebrae apply the alternative options. This Department provides support for the chest, is the most sedentary.

Coccygeal part is characterized by the room DC1 - Со5. It is based on 5 vertebrae. In adults they are a single coccygeal bone.

Anatomy of the lumbar spine

Lumbar-sacral spine is easy to recognize, at its core are the largest vertebrae. In some cases their number is equal to 6, this state is called "globalizacija".

A Distinctive feature of the Department is the main bend. Here is lordosis and a link enabling the connection of breast division and the sacrum. The lumbar part of the spine can withstand the serious load. Here is fixed high pressure of the upper part of the body. 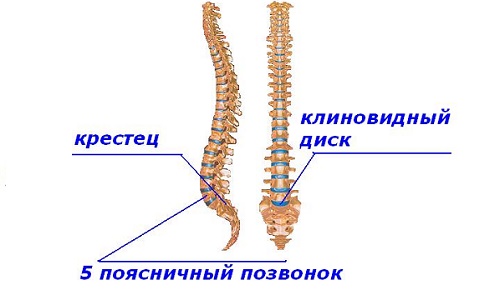 The Sacral spine consists of bones, characterized triangular shape. It is based on 5 vertebrae fused together. This is the norm. With the help of the sacrum connects to hip bones. This is due to their location, like a wedge.

Coccygeal Department is located at the bottom of the spine. It is based on 3-5 vertebrae fused together. The shape resembles the inverted pyramid. Anterior meant for muscles and ligaments. They relate to the genitourinary system and remote parts of the colon. The main function of the coccyx is the load distribution of the pelvis. He serves as a fulcrum.

the functionality of the spinal column

The Unique structure of the spine allows him to perform a number of important human body functions. In the first place, he should be responsible for the movement and load distribution. Because of this when walking the person does not feel discomfort. The spine softens jolts and impact on musculoskeletal system. In addition, certain parts of the vertebrae, namely the rudiments of ribs protect the kidney.

Together with muscular corset they provide reliable isolation of bodies from the negative effects from the external environment. 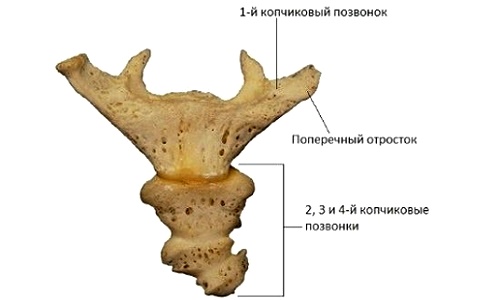 The Sacrum and the coccyx represent a single structure. They are fixedly interconnected. During the generic process of sacrococcygeal compound plays an important role. In this case, the coccyx posteriorly, providing unimpeded passage of the child.

It is commonly regarded as the rudiment of the tail, but to humans it is worth and absolutely did not need. In this regard, it is the smallest region of the spine. The function is minimal. Through the holes of the coccyx are nerve roots, via which the coordination of the abdominal cavity.

Why there is a pain in the rump?

In the sacrum often is fixed pain varying intensity. To date, there are several main reasons for this phenomenon. 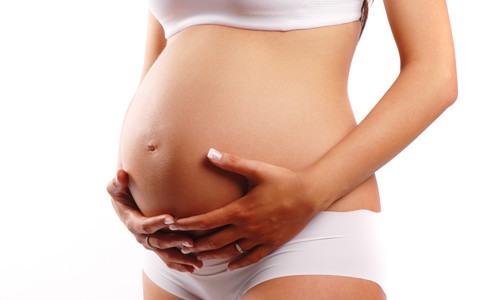 The Reasons for the development of pain syndrome quite a lot. Unpleasant manifestation may be due to abnormal structure of the spine. In most cases, the pain indicates the presence of serious abnormalities in the body. To eliminate the unpleasant symptoms will help the quality of the treatment prescribed after a full examination of the spine.