How many vertebrae in the spine in humans: the number in total and by Department

Home / Description of the structure and functions of spine / What formed and what do the grey and white matter of the spinal cord?

What formed and what do the grey and white matter of the spinal cord?

The Gray matter of the spinal cord is the main component, which is part of the nervous system. It is based on the body of neurons, glial cells and capillaries. 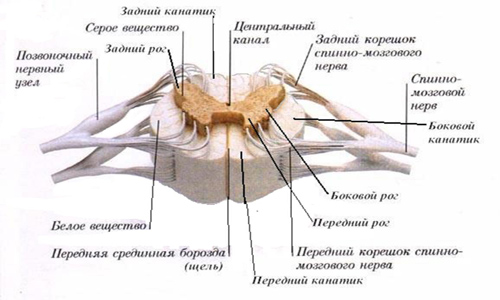 The Complete opposite is a white substance, it consists of myelin bundles. Together, they are important components of the human body. This is due to their unique composition.

According to the anatomic features, the gray matter is an integral component of the white component. Is a cross section, which visually resembles the wings of a butterfly. In the middle is the Central canal, it is filled with a special liquid – the cerebrospinal fluid. 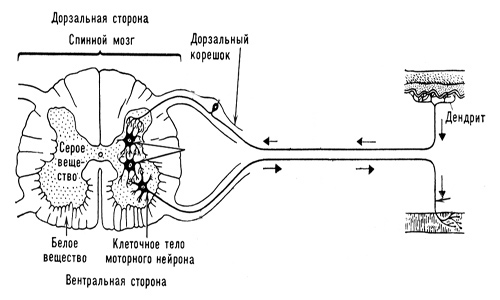 Here are the ventricles of the brain, with close interaction with each other. The fullness of the CSF depends on certain patterns. This is due to a complex plexus of cerebrospinal fluid. Thanks to it you can learn about the human condition and to diagnose many diseases. Among them include:

In the gray matter of the spinal cord there are several columns, are interconnected by a commissure. In the Middle of it you can see the hole which represents the Central canal. The rear and front plates are the main components. When analyzing cross sectional you can see that the interconnected pillars resemble the wings of a butterfly, mentioned above. There are easily visible ledges, gradually diverging at the sides. In the literature they are called horns. Their composition is unique, due to the presence of paired wide and narrow parts. At the core of plates are neurons, consisting of a Central core and auxiliary components. Here are the roots of the spinal cord. 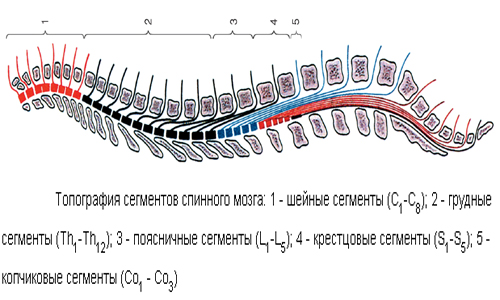 The Gray matter is characterized by the presence of pillars. Posterior horn contains neurons arranged in a certain sequence. They are often called axons, due to its unique structure, they tend to spike the front. This makes it easy to move to the back of the brain. Inset, neurons are the dendrites, the branched form. They form the core that performs a specific function. They are an important component of the spinal nodes. They contain nerve cells, due to the special fork ends components go beyond the limits of the posterior horn.

The Basis of the gray matter are the nerve cells, and more specifically, their bodies.

All they constitute the main component. It is based on three ledges, extending along the entire length of the brain. This design presents the pillars. There are three types of protrusions, respectively, they are in the front, rear and side parts.

The Spinal cord is a collection of motor neurons. Their processes include front roots. The neuron, or rather, his body, formed by nerve cells. They are responsible for supplying the skeletal muscles. The closer they are, the farther they are the main components. Small inset, neurons are the main components of the rear horns. Thanks to them-perception of sensitivity. Cells lying in the spinal ganglia receive certain signals. Resulting in formation of sensitive columns. 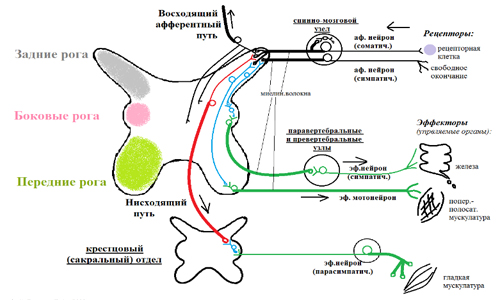 A Certain part of gray matter called the dorsal, is the center. Its main function is to send signals. From this point of view the dorsal part is the most sensitive. Next door to it is located the motor centers. Due to their homogeneous structure, they perform a number of functions. The basis centers are different cells.

The Dorsal part is the most sensitive and consists of 2 main components. They are based on the somatic neurons that transmit certain signals. Get them thanks to the sensitivity of cells underlying the visceral centres. They have a close relationship with engine components that are located in the ventral part of the brain. The unique structure of the cells allows them to move on to the somatic centres, which are based on components, characterized by large size.

The White matter of the spinal cord through interaction with all departments. As a result of this process formed the so-called protrusion or lateral post. Sensitive centers, which transmit signals are located in the horns. Front and rear parts thereof are located in the white matter, but it lies in the cervical spine. White component partially in contact with gray. Forming a single system. The reticular formation is located in the cervical spine. It is based on sensitive nerve cells, the main feature of which is the large number of processes.

Bochkoobraznye cells are found in the gray matter, or rather scattered on it.Processes "settled" in the periphery, so that there is a special rim, called a bundle.

Summing up, it is worth noting that gray matter plays an important role in the human body. It brings to certain spinal cord, certain signals, making them sensitive.