Home / Description of the structure and functions of spine / Where is and is responsible for the spinal cord in humans?

Where is and is responsible for the spinal cord in humans?

The Spinal cord is an important link that transfers the commands of the human brain. this is the body responsible for all movements of the arms and legs, as well as for breathing and digestion. TOOOhe Spinal cord has a very complex structure and is located in the channel along the entire length of the spine. This channel is protected by a special tube.

To Overestimate the importance of the spinal cord is very difficult, because only with its help is carried out all motor function in humans. Even the heartbeat is controlled by signals, the conductor of which is spinal structure. The length of this body certainly changes with age and a middle-aged man can be on average 43 cm

Anatomy of the spinal cord assumes its conditional division into several sections: 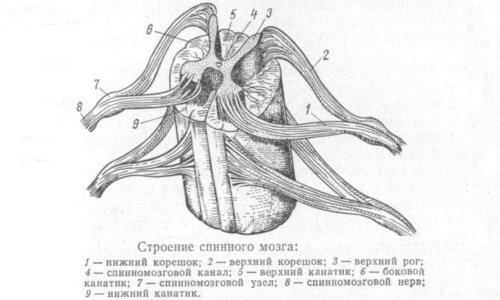 Protection of the spinal cord exercise 3 shell covering its entire length. These shells are called soft, and rigid spider. The Pia mater, the inner, closest to the body and provides its blood supply, being the receptacle of the blood vessels. Arachnoid Pia mater is average for its location. The space between the arachnoid and soft shells filled with fluid. This fluid is called cerebrospinal or, in medical terminology, the cerebrospinal fluid. This liquid is of interest to physicians in the capture of the puncture.

As part of the Central nervous system, the brain is already formed in the beginning of the 4th week of fetal development inside the mother's womb. However, some parts of the body is completely formed only 2 years of a child's life. 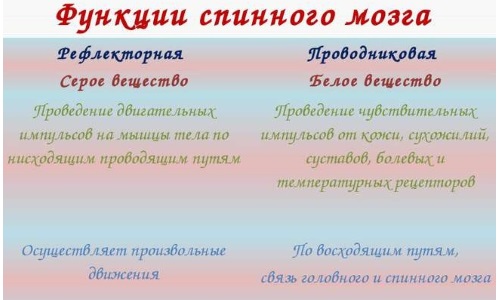 Each nerve fiber is a conductor of nerve impulses that carry specific information.

Segments are conditional components of the spinal cord. Each segment has nerve roots linking nerves with certain organs and parts of the human body. Each segment is 2 to the spine – the front and rear. Each spine of the anterior pair is responsible for the transmission of information for the reduction of certain muscle groups and is called the motor. Rear roots are responsible for information transfer in the reverse direction from the receptors into the spinal canal. For this reason, the roots have been called sensitive.

The Furrows are the second type of recesses in the spinal cord. Such grooves are conventionally divided brain on the cords. All of these cords there are 4 pieces – two on the rear part of the channel and one on each side. Nerves that is at the core of the spinal cord, pass through these cords in the form of fibers.

Each segment is within the same Department, carries clear-cut roles and performs specific tasks. In every Department there are several segments. So, in the cervical 8, thoracic 12, lumbar and sacral sections – 5. Left coccygeal. The fact that this is the only Department that can contain an indefinite number of segments from 1 to 3. 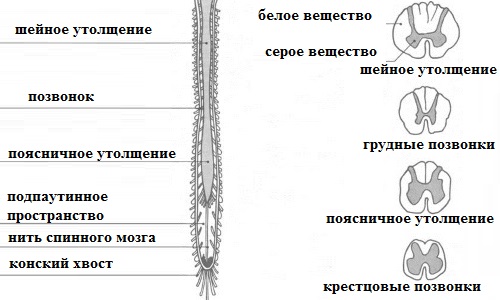 The spaces between the vertebrae serve to hold the roots of specific segments. The roots, depending on the location of the Department, may be of different lengths. This is because in different parts the distance from the spinal cord to the intervertebral space varies. The direction of roots may also vary from horizontal.

Every segment has its own area of responsibility: muscles, organs, skin and bones. This fact gives experienced neurosurgeons can easily determine the affected area in the spinal cord based on the sensitivity of a particular area of the human body. This principle takes into account the sensitivity as, for example, skin and muscle, and various organs.

The structure of this body distinguish the presence of two substances, gray and white. By the grey color of the cerebrospinalsubstance you can determine the location of neurons, and white gives a presence of nerve fibers. White matter, located in the wings of a butterfly, has several protrusions resembling horns. Distinguish between front, rear and side horns. The last are found not in all segments. The front horn is the neurons responsible for motor functions of the body. And the rear horns represent those neurons that perceive incoming information from receptors. Each of the lateral horns is responsible for the functioning of the autonomic system of the person.

For the work of the internal organs respond to special areas of the spinal cord. Thus, each segment is associated with a particular organ. This fact is widely used in the diagnosis.

Functions and features of physiology

The Mechanism of the reflex action is as follows. Receptors on the skin that are sensitive to hot and cold. Information about any impact on skin receptors immediately transmit the spinal cord in the form of a pulse. Such transmission uses special nerve fibers.

neural Impulse takes the body located in the space between the vertebrae. The body of the neuron and nerve fiber is related to the so-called spinal node. Further, the pulse input from the receptor and the past through the fiber and through the node is transmitted back to the horns discussed above. Posterior horn transmit impulse to another neuron. Located in the anterior horns, this neuron, which was referred to the momentum that is physical, and thus momentum, causing the hand to otdelyvatsya, for example, from the hot kettle. However, we do not think to draw back the hand or not, she does it herself.

Types of reflexes can be both congenital and acquired. Each arc is closed at a certain level. For example, favorite reflex that is tested by neurologist, when you hit under the patella completes its arc at 3 or 4 segment of the lumbar spinal cord. In addition, the level of external influence distinguish between superficial and deep reflexes. Deep reflex is determined when exposed to a hammer. Surface arise when light touch or pinprick.

The Transmission of impulses from receptors to the brain center is called the conduction function of the spinal cord. Part of this mechanism was discussed above. The centre is the brain. That is, the brain is the spinal division in this chain intermediary. Conductor function provides the transmission of impulses in the opposite direction, e.g. from the brain to the muscles. The conducting option provides the white stuff. After processing the brain transmitted pulse of the people attains a certain feeling, for example, tactile nature. The brain the spinal Department in itself does nothing but precise pulse transmission.

If at least one link for transmission of information breached, the person may be deprived of any feelings. A disturbance in the activity of the spinal cord may occur if back injuries. So, we found that conducting function provides the movement of the human body in one direction and generates the feeling by swiping information. What is the number of neurons and the connections using? They number in the thousands, and counting the exact number is impossible.

But that's not all, conduction function of the spinal cord and controls the organs. For example, via the dorsal division of the human heart receives information from the brain about needs at this time the frequency of contractions. Thus, to overestimate the importance of the spinal cord is very difficult. Because all body functions, without exception, pass through the dorsal part of the brain. The understanding of how the spinal cord of man, is widely used in neurology for correct determination of causes of disorders.