The structure and function of the sacrum in humans

The Aitch bone is at the base of the spinal column of the skeleton, it is shaped like a triangle. The sacrum in humans is formed by fusion of five sacral vertebrae. Initially, he is not the integrity of bone and is a separate the vertebrae connected by cartilage. Full fusion takes place only after 25 years. Where is the sacrum, in the end. What are the differences in the structure of the sacrum in men and women?

education In support of the skeleton involved vertebrae. Seven of them are going to build the cervical spine, twelve in the formation of the thoracic and five lumbar form. The remaining parts of the pillar have a particular structure, as the vertebrae that form them, are fused. It formed the sacrum and coccyx. Between individual vertebrae are intervertebral discs. Such disk also has between the sacrum and lumbar vertebra closing Department. Their main function is shock absorption. Incorrect position of the sacral vertebrae is threatened by the emergence of pain in this area.

Part of the post – vertebrae. They have a cylindrical body, it is characterized by the maximum strength, as it accounts for the main load. This element performs the primary support function. The back of the body is arc, which in structure resembles a semicircle with radiating spikes. Vertebral foramen, which is involved in the formation of a receptacle of the spinal cord – vertebral canal, formed by body and arch. The vertebrae have multiple processes. Some of them appeared in the attachment of muscles (spinous and transverse). Others form the facet joints and have an appropriate name – articular. The vertebra has a sponge-like structure, i.e. It belongs to the spongy bones. This structure is characterized by the presence of cavities that house bone marrow, which plays an important role in hematopoiesis.

Outwardly, It resembles a flat plate with a rounded shape. In the center of such disk contains a pulpous nucleus, providing a damping function. The core surrounds all sides of the fibrous ring, which blocks the movement of individual vertebrae. Fiber rings intersect in three directions, which gives him the greatest strength.

They are formed articular processes, as well as the bodies of adjacent vertebrae. Near the spine are placed paravertebral (paravertebral) muscles that provide the function of keeping the spinal column and also to allow rotations and tilts.

Anatomy of the sacrum

The Sacral spine is in the form of a wedge between the iliac bones, it is located below the coccyx. Triangular bone has a base (or basis), which is facing up, and top. The body of the fifth lumbar vertebra and the front edge of the base of the sacrum form the Cape in the form of a protruding corner. Bone has front and rear surfaces. The first has a concave shape. It has transverse lines which reflect the sites of fusion of the sacral vertebrae. At the ends of these lines are detected pelvic openings of the sacrum, which correspond to the dorsal apertures on the rear surface. 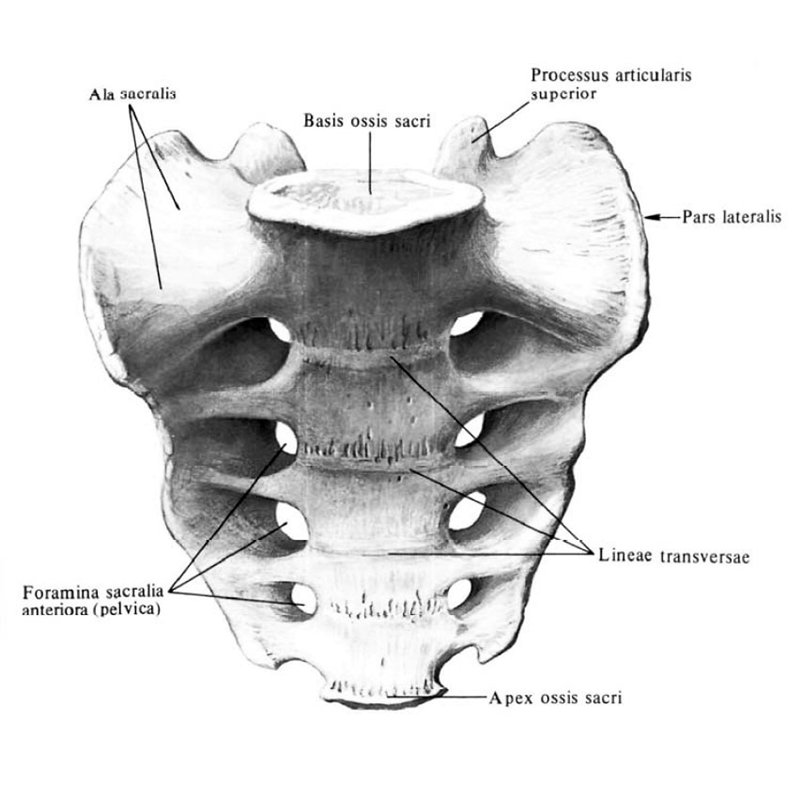 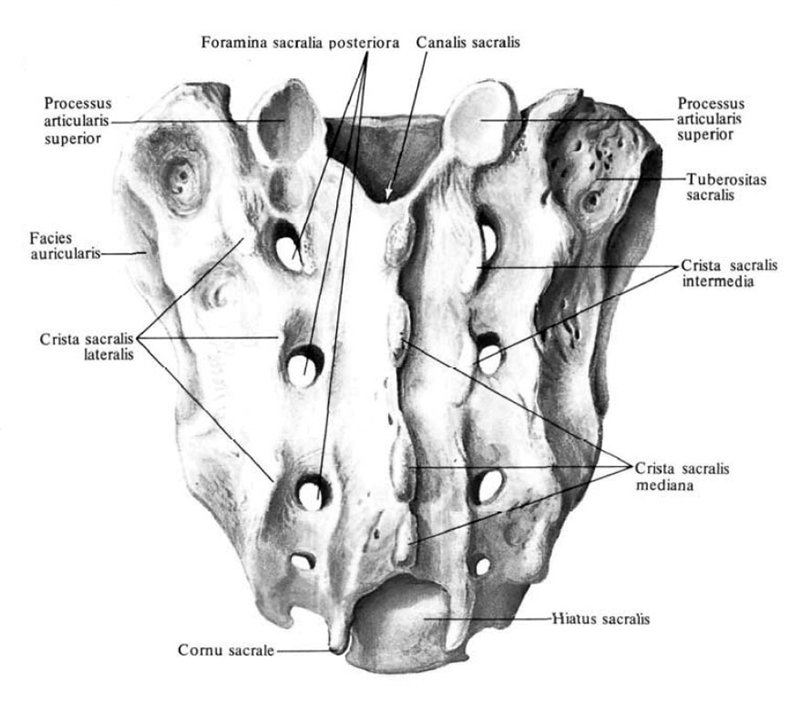 On the lateral articular surfaces of the bones are identified (or articular) surfaces that are in connection with the iliac bones. The place of attachment of certain ligaments and muscles tuberosity, located posterior to the articular surfaces. 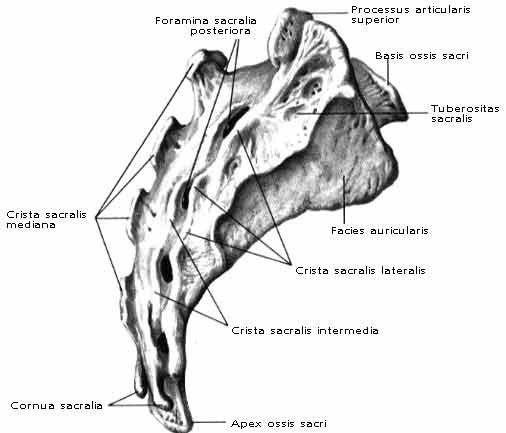 Sacral canal is located within bones of the same name. It is not closed, and ends of the sacral gap.

Sacral canal is characterized by a curved geometry. The upper part of the channel wider, it narrows down gradually. Sacral canal has a message from the sacral holes, which is provided by the intervertebral holes.

The Female differs from the male sacrum is less curved. In addition, this bone in women is wider and shorter.

The Base of the sacrum connects with the fifthlumbar vertebra (transitional lumbar-sacral vertebra), and the top – to the coccyx. In addition, bone connects to the pelvic bone.

The Sacral bone on both sides is connected with the bones of the pelvis. Due to the fact that the articular surface resembles the ear, it is called ear-shaped. It is covered by cartilage (hyaline), this surface is involved in connection with the iliac bone, the articular surface of which is covered with fibrous cartilage. In childhood the joint has great mobility, which is being lost.

Value in the body

The Functions of the sacrum are:

What female pelvis differs from the male

The Differences are related to the fact that the female pelvis is adapted to parturition. It is more wide and short. Also different hole size, in women it is of such a diameter, that through him could pass the body of a baby. In addition, the size is further increased during labor, provided that the mobility of the coccyx. Pelvic bones of men have a large curvature.

The Sacrum is the site of attachment of several important muscles that are involved in motor activity of the lower limb. Among them there is a pear-shaped muscle responsible for rotation movements of the hip. It is the beginning of the sacral bone, and ligaments and greater sciatic hole.

From these structures muscle leaves three small bundles, which subsequently merged. After that, the muscle is directed to the femur, namely, to the spit. Another muscle, the function of which is not less important – iliac. It also originates from the sacrum.

More muscle fibers starting from the iliac fossa and crest. This muscle, like the previous one, ends on the thigh, however, already attached to a small skewer. Its function is flexion of the limb. The view has several bundles partitioned muscle. She, lying in the furrows of the sacrum, is responsible for the bending of the back ago.

The largest in this area is the gluteus Maximus, which also originates from the sacrum and coccyx. In addition, it bundles start from the Ilium. Ends muscle in the gluteal tuberosity. Structure is responsible for rotation and flexion of the limb. The defeat of the described muscle inflammation, usually accompanied by stiffness and pain. An illustrative arrangement of these structures shown. 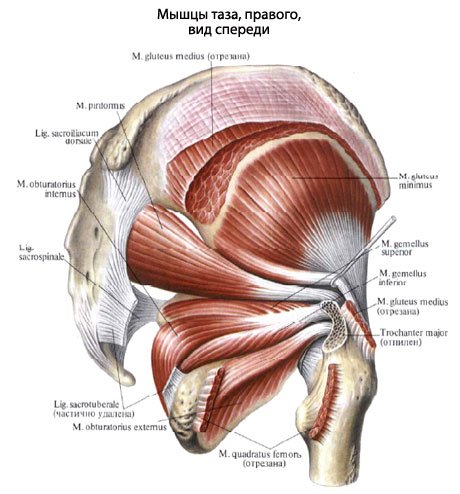 the Anatomy of joints and ligaments

The Sacrum connects to the pelvic bone via sacroiliac joint. It is paired, has a flat shape. The mobility of the joint is negligible. It has a very solid joint capsule, which is under strong tension connected with ligaments.

Sacro-iliac ligament is the most durable and is attached to the same joint. It consists of numerous bundles, which are localized in the gap between the iliac bone and the sacral tuberosity. In addition, the sacroiliac joint connects with the ventral and moralnymi ligaments of the sacrum.

Another ligament – sacral-bogorny. Its beginning is located in the sacrum. Bundles of ligaments are connected and attached to the buttock. There is also the Sacro-spinous ligament, is also a steam room. It is more thin and short. Starting from the top of the sacrum, the structure goes toward the ischial spine, to which is attached.

delivery of blood to the muscles described above is carried out through certain arteries. Thus, the gluteal artery are responsible not only for the eponymous muscular structure but also nourish the piriformis. These arteries are divided into upper and lower. In blood supply iliacus is involved the same branch, which originates from the ilio-lumbar artery. In addition, it supplies the artery, the envelope of the femur. Finally, the viability of a partitioned muscle is provided by the lumbar arteries.

The largest of all is the sacral plexus, which is formed from lumbar nerves (fourth and fifth) and also from sacral nerves (first – fourth) extending from the anterior sacral foramina. The plexus lies on the ventral surface of the sacrum and piriformis. It is covered with parietal leaf of the pelvic fascia.

The Plexus forms a short and long branches. The position of the nerves of the plexus are indicated in the figure. 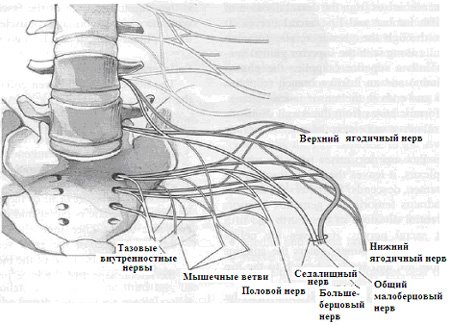 Among the long branches the most important is the sciatic nerve. Damage to this nerve is causing pain of different intensity, which often requires closures for the purpose of pain relief. The extent of localization of pain with sciatica is a great lengthnerve running down the thigh and then divides into smaller branches. For the innervation of the skin in the thigh meets the same nerve – posterior cutaneous.

More Short branches, they Innervate the skin and muscles in the genital area and also the muscles of the waist. They include the pudendal nerve, branches of which go to the rectum to supply the sphincter muscle and surrounding skin. Part of the branches provides the function of the muscles of the perineum, they received an appropriate name. And one more branch – the dorsal nerve, which is involved in the innervation of the external genitalia in men and women. Gluteal muscles are innervated by the same nerves. In addition, give off muscular branches, which are responsible for other muscles in this area.

skeletal Trauma – fractures of the sacrum

Fractures of the sacrum can be combined with injuries of the coccyx and hip bones. Depending on the severity there are two variants of fractures.

The Stable fracture is usually treated with conservative methods and has slightly shorter period of recovery.

You can Also select the following types:

The Main symptom of such traumatic lesions of the skeleton is a pain, the intensity of which may vary. In addition, patients complain of numbness of the skin of the lumbar region, and thighs and buttocks. Often seen paresis of the limbs. In the damage is detected the swelling and in some cases a hematoma. Typically used for diagnostic x-rays and computer and magnetic resonance tomography, which helps to identify even minimal damage to the skeleton.

For the treatment of traumatic injuries are used predominantly conservative methods, which aim at restoring the integrity of damaged bones and weakening pain. Immediately after the injury, mandatory bed rest and limited mobility. Further therapy combines the functions of analgesics and physiotherapy. In more severe cases, when the fracture is complicated, it is necessary to resort to surgical intervention.