Home / All about herniated discs in the various divisions of the spine / What you need to know about schmorl's hernia of the lumbar, thoracic and cervical spine?

What you need to know about schmorl's hernia of the lumbar, thoracic and cervical spine?

Such a formidable name as hernia Shmorlja, subconsciously evokes something serious and incurable. In fact, hernia (knots) Shmorlja is pathological changes in the intervertebral discs (usenative defects) that result in the cartilage presses of the adjacent (higher or lower) vertebra. This is the difference between hernia Shmorlja from the usual hernia of the spine, where the protrusion goes in the direction of the spinal canal or from him, and is accompanied by severe pain.

schmorl's Hernia has no obvious symptoms, because it does not lead to compression of the nerve roots, intervertebral hernia. However, it is still a pathology and also to a certain extent, dangerous.

The Progression of degenerative and destructive processes in the intervertebral disc leads to its dysfunction. In the end, there can be formed an ordinary hernia, with all its consequences or compression fracture of the vertebra. The reasons for such changes (increased load, or conventional injury) in a healthy spine very rarely lead to such consequences. 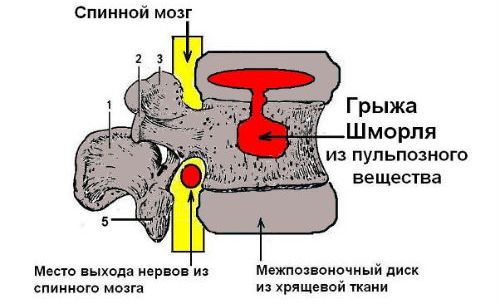 Such is the pathology of the intervertebral disc occurs in people with fragile weak bones of the spine, or rather of the vertebrae. Therefore, most often, is diagnosed in young adulthood, predominantly in the lumbar and the lower part of the thoracic spine. In the cervical spine it almost never occurs.

Identification of nodes Shmorlja – rather a Wake-up call to the fact that the condition of the intervertebral disc and vertebrae of a particular segment of the spine require special attention.

The Emergence of sortivnyh defects may contribute to the causes of both congenital and acquired character. An example of the first can be small hernia Shmorlja, due to innate design features of the vertebra. Causes, acquired in the process of life and leading to the formation of such defects can be as follows:

As the reasons for the shmorlja nodes in children can be called that bone just can not keep up the development of muscle, resulting in the vertebrae are formed defects in the form of voids. 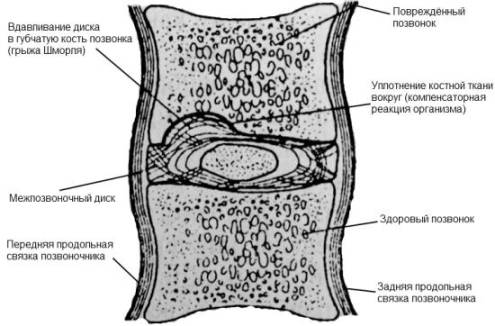 Symptoms – where and how it hurts

In most cases, the intracorporal hernia (hernia Shmorlja) detected by chance, when passing x-ray examination on another occasion. This lack of clinical manifestations can be explained simply: the pathological process captures the disc and the bone tissue of the vertebrae, which don't hurt. The spinal cord and nerve roots this disease affects so pronounced painful symptoms, which gives a normal hernia, it is not typical.

The Pain, and if appears, already with a substantial amount of hernia and is weakly pronounced, aching character. It is provoked by prolonged standing, fatigue or after long period of walking load. Often the pain symptoms are accompanied by feeling of tiredness in the back and held in a supine position.

The Cause of pain in the lumbar or thoracic spine are not usenative defects in the spine, and the reaction of tired muscles and the tissues around them.

Intracorporal hernia may also be accompanied by such manifestations of incorrect posture as stooped posture, swelling of tissues in the area of their arrangement, a feeling of discomfort and some restriction of mobility of the spine.

The progression of the hernia can lead to severe curvature of the spine in the form of kyphosis (in the case of disc lesions in the thoracic region) or lordosis (in the localization of nodes Shmorlja in the discs of the lumbar spine).

depending on the location, hernia Shmorlja is of the following types: Central, side, front and back.

The Appearance of pronounced pain in the cervical region of the vertebral column suggests that the reasons most likely not related to usenative defects. Because the location inthe cervical segment is not typical for them.

Nodes Shmorlja can also be a manifestation of disease Chairman Mau. Often is a multiple hernia accompanied by pathological curvatures of the vertebral column: kyphosis in the thoracic region and smooth the bending of the lumbar.

The Diagnosis is made on the basis of:

The scheme, which will cure the patient, was the most correct and effective, the doctor may engage in a consultative manner other specialists (orthopedist, spine, neurologist).

When and how to treat hernia Shmorlja? Sortivnyh detection of defects in the spine is a reason to start treatment. Even if the clinical picture is absent, the treatment will be aimed at preventing further development of the pathology.

Treatment of shmorlja nodes is determined based on many factors: patient's age, sex, and the nuances of his professional activities, depends on the degree of pathology and the presence of comorbidities. Also take into account the cause, if it's an injury – treat the injury will need if the disease Chairman Mau – to treat this disease.

Assign treatment objectives are as follows:

As methods of treatment are applied:

Among the restrictions are exercises involving axial loading on the spine, jumps, and exercises on weight machines and carrying heavy loads.

Treatment of nodes Shmorlja traditional methods is not very different from the position of official medicine and includes exercises, therapeutic massage and a compress of alcohol tinctures of medicinal plants (dandelion, flowers chestnut) or mix raw potatoes with horseradish.