Everything you wanted to know about cervical hernia

The disease affects mostly men from 45 years. Prerequisites to the development of hernias are injuries and degenerative diseases of spine (osteochondrosis).

What is a hernia

The Intervertebral disc is a: centrally located gelatinous nucleus pulpous, surrounded by elastic fibrous ring. Fibrous ring is tightly attached to the adjacent vertebrae and provides flexibility and mobility of the intervertebral joint. The kernel performs the shock-absorbing function.

Trauma or degenerative processes, the integrity of the fibrous ring is broken and a pulpous nucleus shifts outwards. This condition is called protrusion. In the complete rupture of the annulus pulpous nucleus partially extends outward with formation of herniated discs, for example, of the cervical or lumbar spine.

Causes of herniated discs in the cervical spine

The Main reasons for the formation of a herniated disc of the cervical spine are degenerative process or injury.

Recall that the cervical spine is the most mobile, it is taking every possible movement with large amplitude. Cervical vertebrae and intervertebral discs here are more fragile and smaller than the thoracic and the lumbar spine, therefore more often exposed to injury and wear out faster.

Most Often, the hernia is localized between the fifth and sixth or sixth and seventh cervical vertebrae, as in these intervertebral joints are the most frequent awkward sudden movements (flexion and extension, for example, during sudden braking of the vehicle). 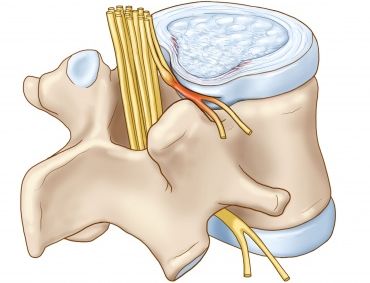 The Main symptom of a hernia of the cervical spine is pain caused by nerve root irritation or compression. The pain can be from moderate to severe episodic more constant and depends on the size of the hernia.

Pain radiating along the strangulated nerve fibers and may be determined in the hands, the head and the heart. The pain on the back of the neck accompanied by muscle tension and some straightening of the cervical lordosis. It increases with coughing, sneezing and head tilt.

Unpleasant feature of this localization protrusions are severe consequences due to the anatomical structure of the cervical spine.

The Spinal canal is narrower here than in other departments, and even relatively small herniation can cause compression of the spinal cord.

symptoms of cervical disc hernia will be joined by dysfunction of the pelvic organs (incontinence of urine, and in severe cases, and feces) and the lower limbs, until the development of paralysis.

So at the slightest sign of a hernia of the cervical spine should be consult a doctor and pass a comprehensive examination. Early treatment of this disease will help you avoid disability in the future.

Headaches, dizziness, tinnitus, numbness of fingers and pins and needles, stiffness when moving the neck, unsteadiness of gait, poor memory, unstable blood pressure, and nausea are also symptoms of herniated discs of the cervical spine.

because Of these diverse manifestations of this pathology are often confused with other diseases, such as vascular dystonia or hypertension, which leads to wrong treatment and progression of the pathological process.

The Main clinical studies are radiography and magnetic resonance imaging. Be sure to conduct a comprehensive examination to exclude serious diseases such as tumor of the brain and spinal cord, metastases to the spine and diabetic polyneuropathy.

As more research is assigned a myelogram, CT scan and electromyography, during which the estimated time of the nerve impulse.

Treatment: conservative (without surgery) and surgical

Treatment of a hernia of the cervical spine can be enjoyedconservative and surgical methods.

By conservative methods include the following activities:

All these methods are aimed to alleviate muscle tension, improve blood circulation spine, improving its flexibility and elasticity and strengthening of the neck muscles. Stretching is carried out already during the cold period, its aim is to increase the distance between neighboring vertebrae, allowing the nucleus pulpous to stand in its place.

Surgical treatment of herniated discs of the cervical spine as a rule, consists in the excision of pathologically changed tissues, causing compression of the nerve roots. This interference is called a discectomy or microdiscectomy.

During the endoscopic procedure all manipulations are carried out under the control of a miniature endoscope performed through a small incision in the area of operations.

When a significant destruction of the disk is replaced by a special prosthesis.

Treatment of cervical hernia folk remedies should be started only after consulting with your doctor.