Home / A description of the various diseases of the spinal cord / Symptoms, diagnosis, treatment of foraminal stenosis

Foraminal stenosis – narrowing of the spinal canal at the level of exit of the nerves from the intervertebral foramina. Most often the compression is caused by bony growths osteophytes (osteochondrosis or spondylosis of the spine) or the accumulation of inflammatory fluid.

The Second name pathology – lateral stenosis, which reflects the localization of compression (in the lateral part of the spinal column). According to the statistics, the majority (75%) of foraminal stenosis occur in the lumbar spine. The remaining 25% are evenly distributed between the cervical and thoracic divisions.

The Clinical manifestations of the disease in 80% of people due to the sciatic nerve. He is one of the largest nerves of a person and passes through the gluteal region to the lower limbs.

foraminal Stenosis – medical definition from the Latin "foramen" is "hole". The narrowing of the intervertebral foramen leads to the infringement of the nerve roots emerging from the spinal canal. Such a condition is dangerous with serious consequences and disabilities.

What signs indicate the presence of foraminal narrowing:

For example, very often together with degenerative disc disease sciatica occurs due to piriformis syndrome (increased tone with the sciatic nerve).

A Skilled neurologist is able to identify the first signs of foraminal stenosis and to appoint adequate treatment. If the disease will progress, even surgery will not eliminate the disability. This pattern is observed in more than 70% of people with this pathology, despite the fact that foraminal nerves is considered to be a benign disease in comparison with Central spinal stenosis.

The Symptoms of foraminal stenosis are observed narrowing of the hole by more than 1/3.

what are the symptoms receives a diagnosis of foraminal stenosis of the spine:

Increased pain when bending forward is a specific marker of spinal pathology. If the infringement of nerve trunks in the intervertebral holes people can climb stairs, ride a bike without pain in the lower back, buttocks and lower extremities. However, when walking on a flat surface, the descent and he develops a strong pain.

These symptoms are due to the specific localization of nerve compression in the crevices between the vertebrae. Anatomically when bending forward they are narrowed, which increases the compression. Upright foraminal openings return to normal, therefore the pain disappears. 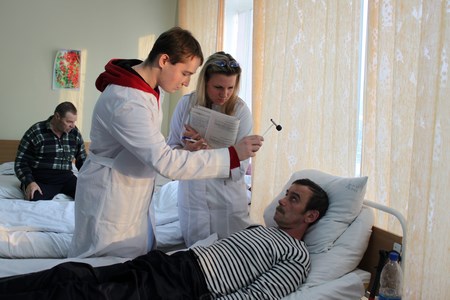 The Diagnosis of foraminal narrowing of the spine is exposed on the basis of the following clinical data:

If there is suspicion of concomitant stenosis of the spinal canal and lateral contraction, is applied myelography (contrast study of subarachnoid space of the spine).

When bending the leg the lumen of the spinal canal is reduced. This is based on the Lasegue test: the patient in the supine position bent legs in the knee joints, and he has lower back pain.

A Negative Lasegue test is not evidence of absence of pathology. The disease progresses gradually. With a slight decrease in the size of the intervertebral gap in the initial stages may not have neurological symptoms. To expose the diagnosis it is possible when receiving data of clinical and instrumental methods (x-ray, CT, MRI) with respect to the existence of narrowing of the foraminal openings on one or more levels of the spinal column.

Treatment of foraminal stenosis include conservative and operative methods. Drug therapy the disease is carried out by the following methods:

Physiotherapy when foraminal stenosis is performed to strengthen the muscular frame back, which would be required to maintain the height of the intervertebral gaps. Thus, it is possible to prevent occurrence of pain.

Normalization of lifestyle when the disease involves the exclusion from the diet of fatty and spicy foods. It is necessary to use a large number of vitamins and minerals from natural plant products. They improve blood circulation and help to fight inflammatory and edematous lesions in the soft tissues of the vertebral column.

If pain persists pharmaceutical preparations, you can apply steroid injections of funds into the subarachnoid space at the level of compression of a nerve root. The effectiveness of this therapy achieves 50%, but because of complications it is not recommended to apply it more than 3 times a year.

Surgery for foraminal narrowing is performed when vertebral instability or when conservative treatment did not bring positive results. Its goal is decompression of the nerve fibers. The surgery is performed through a small access (4-5 cm), which creates severe cosmetic defects of the skin.

In Europe developed by the installation of interspinous spacers. They involve the installation between the spinous processes of the vertebrae in the area of damage of special products to prevent lowering of the intervertebral gaps. With the help of these products expands the intervertebral gap, which eliminates the nerves and the appearance of pain.

The Introduction of the spacers relates to low-traumatic operations. The device is installed through a small skin puncture using the puncture under the control of digital x-ray installation.

When intervertebral hernia perform this surgery will not bring relief to the patient, because the bulging disc can compress the nerve roots, despite the increased foraminal slit. To eliminate the pathology, in this case applied neurosurgical decompression with removal of pathological lesions and bone growths in the cavity of the spinal canal.

Traumatic or Degenerative lateral stenosis is not related to the number of light pathology, treatment which can be performed at home. The disease requires early detection and treatment in a specialized hospital. The only way to prevent disability.