Fractures of the spine

Causes, main symptoms, diagnosis and treatment of injuries of the coccyx

Under the bruises, as a rule, in medicine we mean such damage to soft tissues and organs, which are formed as a result of trauma exposure and are characterized by the preservation of the integrity of skin and bone elements after injury. Coccyx injuries are common, especially in children, the elderly, when skating, slip on ice, some of the physical exercises, dances, accompanied by a fall in the gluteal region. At that, the group in the fall helps to avoid more serious injuries.

Bruised tailbone is not dangerous by itself, but its long-term consequences.

The Main symptoms of injury of the sacral-coccygeal area, pain in this area, swelling and cyanosis of the skin and soft tissues, the presence of hematoma.

Pain in the Sacro-coccygeal region after injury and occur when walking and when sitting (especially long-term, with the crossed legs on the soft), lying on side pain reduced. Sharp increase in pain when the coccyx injury can be observed when getting up from lying down or sitting. Palpation (feeling) the tailbone also hurts. The maximum intensity of pain the first two or three days, in the days that followed, it is possible to note a gradual decrease in the intensity of pain.

The Degree of pain each patient assesses differently, so for trauma surgeon or podiatrist the pain should be described as follows:

Swelling and cyanosis of the skin at the site of injury can be of varying intensity. Development of the maximum swelling occurs on the second day from the time of injury.

A Hematoma is a bruise, bleeding into the soft tissue with the formation of peculiar cavities, delimited by surrounding fascia, connective tissue septa. 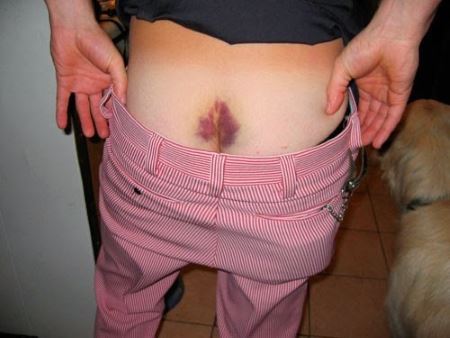 It Should be noted that not always a bruised tailbone is accompanied by the formation of hematomas (bruises, bruises) as in figure 1.

When the coccyx injury can be made only slight swelling outwardly intact skin over the Sacro-coccygeal area, pain can be very significant. What is the reason?

In this case, the severity of external symptoms and pain due to the depth of damage. The deeper the damage occurred soft tissue injury in the sacral-coccygeal region (a strong bruise of the coccyx), the less pronounced swelling, redness, and lividity of the skin and more pronounced pain syndrome, and Vice versa.

The Diagnostic tests for this injury is fairly simple. Primarily doctor conducted a patient survey to determine the relationship traumatic factor and the mechanism of injury and examination. In addition to visual inspection, palpation of the sacrococcygeal region, I now have a rectal digital examination. Its purpose is to assess the degree of pain by the rectum, the condition and tone of the pelvic floor muscles, the degree of mobility of the coccyx to rule out a more complex injury to the Sacro-coccygeal region (for example, fracture of the coccyx).

unlike fractures and dislocations with the injury of the Sacro-coccygeal region with rectal examination will not be excessive pathological mobility of segments of the tailbone, pain when carrying out the study. Perhaps a reflex strain of muscles of the pelvic floor with involvement of the coccygeal plexus and the sacrococcygeal ligaments.

Of additional methods of examination using x-rays of the sacrum and coccyx in two projections. Radiography of sacrococcygeal region is performed in all patients to exclude fractures and dislocations of the coccyx. TOOOhe Validity of this approach to survey patients due to the complexity of therapy in the future.

Differential diagnosis of coccyx injury (ICD S30.0) and other injuries presented in the table below.

The Algorithm of rendering first aid in case of injury of the coccyx should be as follows.

In the first place the victim should ascertain the mechanism of injury. If it is associated with the fall in the gluteal region, with pain clearly localized in the sacrococcygeal region, can be used topically on the area the cold (ice, snow, ice) for half an hour, and also treating your skin over the injury ointments with NSAIDs ("Fastum gel", ointments with diclofenac, ibuprofen, etc.).

Apply inside any painkillers before a doctor is not recommended. TOOOraumatologist's better to visit in the first two days from the time of the fall.

If the injury is linked to fall flat (his whole back), and give pain to the groin, perineum and feet as well as the disturbances of motor function of lower extremities (paralysis, paresis), the victim should not raise and make any manipulation, because it is not a bruised tailbone.

First aid in this case is the abandonment of the victim in the supine position and call an ambulance.

Next you should talk about how to treat a bruised tailbone. 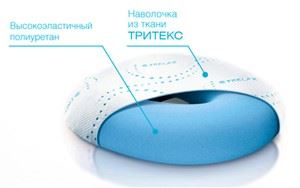 The Main drugs used for bruises, indicated in the table below. For external treatment of bruises is better to use gel form. Why? If you apply the ointment, then they are more bold in composition, therefore, the absorbability of the drug can be difficult, and in the treatment of injuries is important, the availability of the drug. Ointment good where there is pathology of the skin. When using the gel (it's usually water based) the medicinal substance rapidly penetrates deep into the affected area.

When severe pain syndrome when disturbed sleep and quality of life of the patient, the possible application of closures to alleviate the condition. Blockade is carried out with the use of novocaine and procaine + lidocaine (increased pain), novocaine + hydrocortisone, novocaine + of kenalog (pain relief and anti-inflammatory effect). The patient is placed in a chair on her back with legs divorced, determine the point of puncture between the tip of the coccyx and the anus, infiltrating the tissue with a solution of Novocain for anesthesia procedures. Next, the needle of the syringe deep into the promote, the direction of movement of the needle determines the location of the coccyx and the rectum palpation. The depth of the needle puncture of 8-10 cm, the needle should get to the back rectal cellular spaces, introduced there the solution is distributed by fiber to the ligaments, the coccygeal plexus and there has a therapeutic effect. The total administered dose is 100-120 ml.

the Prognosis for the injury of tailbone

The Most unpleasant consequence of contusion of the coccyx is kokcigodiniâ. It is a disease characterized by severe pain in the sacrococcygeal region, especially with prolonged sitting, sitting on soft, which increases when standing up. While walking the pain decreases. the Problem of this pathology lies in the complexity of its treatment. In this regard, a bruised tailbone is better to cure at once.

how Much time is required to restore health? Typically, when adequate therapy bruise can hurt for months, if pain persists for a long time, then we can talk about lack of diagnosis (possibly undiagnosed sprains, ligament tears, fractures of the segments of the coccyx, etc.) or on the formation of coccygodynia as a complication of injury.

With the aim of preventing the development and chronic coccygodynia pain in the coccyx with the third week, you can perform special isometric and isotonic exercises for the muscles of the pelvic floor and pelvic girdle prescribed physical therapy.