Hyper-kyphosis is an excessive curve in the thoracic spine posteriorly. Occurs most often in young people who incorrectly sitting at a school Desk, have a weak muscular corset back, carry heavy briefcases on one shoulder.

Even if Hyper-kyphosis detected in an adult, you should seek for the beginnings of pathology in childhood. 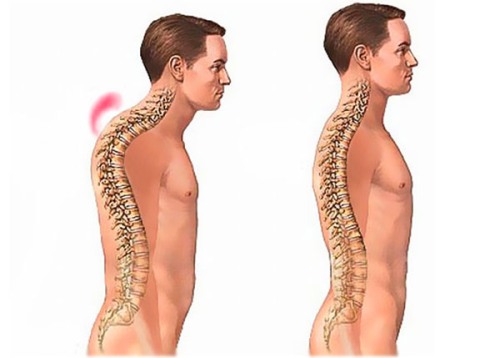 Causes excessive curvature of the spine

Hyper-kyphosis (kyphotic posture) is classified into:

Congenital excessive flexion of the thoracic kyphosis is the result of hereditary weakness of the ligamentous-muscular apparatus or malformations of the spine (disease of Chairman Mau, osteochondropathy of the vertebrae).

This form does not manifest itself immediately after birth. It is detected in the period of intensive growth of the skeleton (14-17). In this situation, skeletal muscles cannot cope with the loads that are generated due to increase of mass of the vertebral column. The vertebrae increase in size, and the muscles of the back of weakness in the can not fully support the vertical axis of the spine.

depending on the reasons distinguish following kinds of hyperkyphosis thoracic spine:

There are other more rare forms of pathology from other causes: tumor, infection, radiation, drugs.

the Impact of breastfeeding on the health hyperkyphosis

Excessive thoracic flexion noticeable during the external examination of the upper back. In this case, the doctor can detect several types of posture:

The Stoop characterized by mild bulging of the upper third of the back posteriorly (with an angle of 45-55 degrees), the divergence of the blades to the sides, displacement of the head anteriorly.

The Spine and the hump is more pronounced deformation (angle of 55-60 degrees). A person with this pathology clearly excessive protrusion of the upper third of the back posteriorly.

Round back is a pronounced Hyper-kyphosis with flattening of lumbar lordosis. This type of posture shoulders SAG downward and anteriorly, abdomen protrudes, shoulders become the pterygoid, the center of gravity of the trunk moves posteriorly.

In most cases, the body compensates for the changes described by some transposition:

depending on the severity of the changes Hyper-kyphosis is classified into:

Compensated pathology is accompanied by the location of the shoulders directly over the pelvis, which allows to rationalize the body weight under the circumstances.

Decompensated type is characterized by excessive curvature of the axis of the spinal column in which the process affects all the body: shoulders go down, and the pelvis shifts forward. Against this background, the weight of the body falls primarily on the joints of the lower extremities, which over time leads to the formation of arthritis (synovial cartilage damage with difficulty in flexion and extension).

Classification and treatment of the disease

depending on the shape of the curvature of the Hyper-kyphosis can be:

bow-shaped kyphosis is accompanied by a uniform increase in the whole plane of the upper third of the back with the formation of gently sloping peaks at a certain level. Deformation is clearly seen when tilted forward.

Probrosy Hyper-kyphosis characterized by the formation of an acute angle in the area of thoracic ("spine hump").

At the location of the warppathology is divided into:

depending on the localization angle is selected hyperkyphosis treatment of the disease. See the results of the radiographs of the thoracolumbar spine in the lateral plane, or with a special tool – kilometre.

Treatment of disease also depends on the specific age characteristics of the organism. As a result, doctors have adopted the following classification of diseases:

In children, the disease caused by either congenital anatomical features of the spine (rarely), or weakness of the muscle corset back. Bone pathology requires surgical treatment and removing the cause. The muscular form is treated by using therapeutic exercises and physical therapy, treating pathological gait patterns and bad posture. 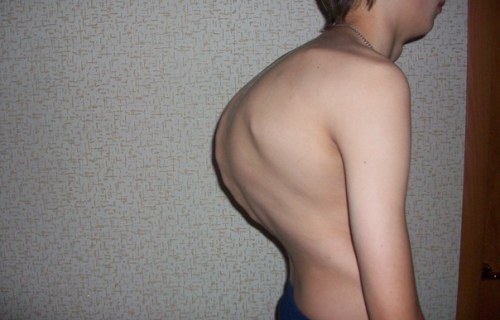 Treatment of juvenile hyperkyphosis requires a comprehensive approach. The young men formed round the back, in which changes and lumbar lordosis.

When presenile (presenile) and senile form there are many diseases that cause curvature of the spine. Consequently, to eliminate bending is almost impossible, and all therapeutic measures are aimed at getting rid of significant pain syndrome and therapy secondary pathology (osteoarthritis, calcification of ligaments).

Thus, excessive curvature of the thoracic spine (Hyper-kyphosis) is a serious pathology that should be treated early. Over time formed irreversible changes, which often lead to disability.