Treatment of abscesses on the coccyx

The Coccyx is an important component of our body, it is one of the points of support and place of attachment for various muscle groups. The manifestation of pain in the coccygeal region or boil causing a lot of inconvenience, therefore you should not delay the solution to this problem and should immediately consult doctor for treatment. 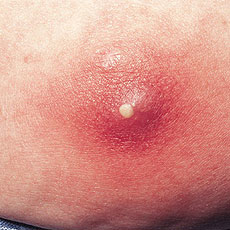 In Addition to abrasions, causes of ulcers in the coccygeal area can be:

Boils are called very frequent occurrence of pustules on the body that is associated with infection of the hair follicle and the surrounding tissues. Boil on the skin can occur to absolutely any area where there is hair (see photo below). It most often appears on the chin, neck, nape, above the upper lip, in the armpits or in the coccyx area. Fester has a reddish hue, dense to the touch, painful. With the development of the inflammatory process appears whitish head that turns yellow and erupts with pus.

After the rejection of purulent masses, the boil begins to heal, with the possible formation of scar.

In the initial stage of the formation of the boil there is a tubercle, the seal is an internal infiltration. The skin area becomes very painful, burning and tingling badly. When it ripens, and large solid tumor, the pain is sometimes unbearable. Swelling begins to spread to the surrounding tissues. That is, if your boil is, for example, the eyes, the swelling goes on forever, if the boil on the body, swelling may be small. Infiltrative stage, usually lasts 2-3 days.

Then the abscess increases in size to about three inches. Begins to show the necrotic core and the place of inflammation becomes a cone shape. This stage is accompanied by maximum pain. Boil delivers a maximum of inconvenience and discomfort. Can sometimes cause a fever and high temperature. Can also be headache, nausea, weakness and lack of appetite. 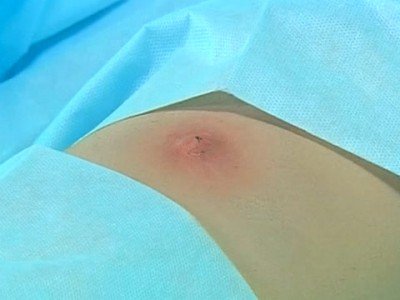 The third stage is the exit of the pus, scientifically speaking – opening the abscess. It can be accelerated by surgical intervention or to wait for an independent autopsy. From the boil will go out the pus along with blood. Necrotic core that is inside the boil, it has a yellow-green color. After all the pus comes out, the pain will begin to subside and the site of inflammation is significantly reduced. Then will begin the healing process. Where was the pus, will remain a major groove, which begins to scar within two to three days.

If the furuncle was small, then, most likely, the scar will remain unnoticed. But if the boil remains quite deep and noticeable scar.

How to distinguish a boil from carbuncle

Boil and carbuncle have a number of differences, you need only to look at pics of both ailments. Boil is abscess around a hair follicle, but the carbuncle is accompanied by the involvement of several follicles and, consequently, can form several heads. 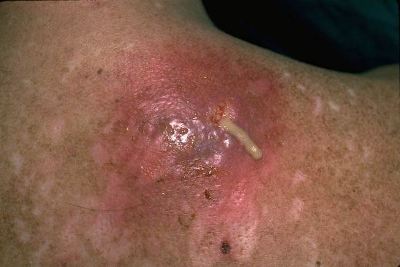 If you notice a boil, you should immediately seek medical help, the disease is not treated in the hospital, it may be easily done in a typical clinic. Except in the cases of multiple furunculosis, complications and challenging cases of localization of the abscess. Carbuncle, in turn, requires more serious treatment in the hospital. The disease is difficult, develops a fever, there is fever and symptoms of intoxication. During therapy, use of prescription antibiotics, which in the case of boils are not required.

Why acne occurs in the coccyx area

In this area quite a lot of hair follicles, so the occurrence of boils in this area is very popular. He may receive in respect of non-compliance with the rules of personal hygiene, heavy perspiration, wearing tight clothes (too tight elastic bands, friction of the fabric), and also from hypothermia this area, improper removalhair in this area. At this point, the boil is particularly painful, so you should immediately consult a doctor to start treatment. Under any circumstances do not try to squeeze the boil.

boil Treatment depends on the stage of pathology development. At the initial stage (infiltrative) used a special exposure using a UV lamp, anti-inflammatory and external means, Vishnevsky ointment, or Ichthyol (contribute to the delimitation of inflammation and a more rapid opening of the abscess).

If timely treatment to the doctor to the development of boils docked or quickly transferred to a next stage to speed up the process and get rid of the problem.

At the stage of formation of the necrotic core (head), the surgeon may open the abscess, treated with antiseptic solution and apply a bandage and further treatment in this case involves dressings with antiseptic solutions ("Furatsilin", "Miramistin", "Chlorhexidine") and anti-bacterial ointments (syntomycin, "Levomekol", "Baneuoqin"). 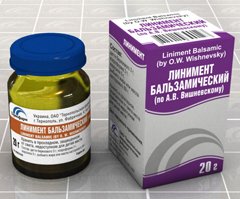 If the pus began to stand out and the abscess was discovered independently, we need to process the selected hydrogen peroxide, bandage with hypertonic saline. Also in this case helps levomekol or syntomycin ointment.

There Are cases where this disease gives complications in the form of an abscess or cellulitis, treatment only operative. Therapy will be in the opening and drainage of the formation, followed by dressings and antibacterial therapy.

To avoid this problem and to protect yourself from the appearance of boils, just enough to follow the rules of personal hygiene after training and sweating to take a shower and change underwear.

Treatment should continue until the complete disappearance of the problem, otherwise similar ulcers may occur again at the same place. It is impossible to take hot baths, heat the center of the boil to make different kinds of compresses, this can lead to the spread of infection and development of complications. In addition, it is not necessary to do massage in this area.