The structure and function of the spinal cord in man: the concept of the segment

One of the components of the Central nervous system – spinal cord, structure and functions of which very long for doctors to remain a mystery. It happened because nature took care of him very well and protected from unnecessary interference.

Modern scientists have not lost interest in this part of the human body. External and internal structure of the spinal cord is unique. Every element is responsible for specific functions and performs them. And the material of which it consists, researchers still cannot be created artificially, using the most advanced technology.

The Structure and function of the brain help the body work properly.

Anatomy of the spinal cord

Nature has taken care of the spinal cord, placing it in special the spinal canal. Externally, this body looks like a cylinder, covered with a protective membrane. The length is on average slightly more than 40 cm and a diameter of about 1.0-1.5 cm weight of the brain from 30 to 35 g. In its centre is a canal of small diameter. Located on top of the containment.

Place the human spinal cord from primary on top of the vertebra (in the neck) to the bottom of the second lumbar vertebra (upper border). shape of the brain is identical to that of the vertebral column. 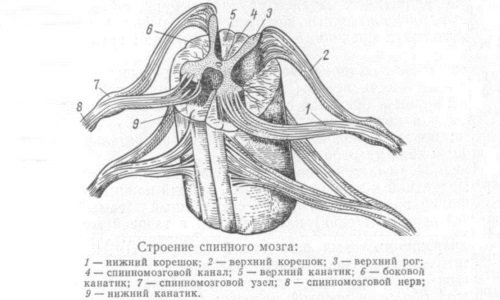 In the upper part of the brain stem flattened. Here it connects with the brain. At the point of their connection there is spinal nerve related to the neck. At the bottom it becomes a bone in the form of a cone, ending with a thin cord filament. This thread is in its beginning of the nerve, and in the end – from the tissues, similar to spinal membranes. The thread gradually flows into the canal of the sacrum, where it is fused with the periosteum. In this part it has coccygeal nerve endings in the form of roots.

The Amount of brain substance is somewhat less than the volume of the spinal canal. The remaining space is filled with the meninges and other components.

The External structure of the spinal cord differs from that of the brain that is in my head. It's simpler. It consists of 5 departments.

The Spinal cord varies in thickness. It is thicker where there are nerve cells responsible for movement of the arms and legs.

The brain Stem in cross section looks like this: it's almost in the middle of the circle in the top oval, and the bottom is similar to a square. 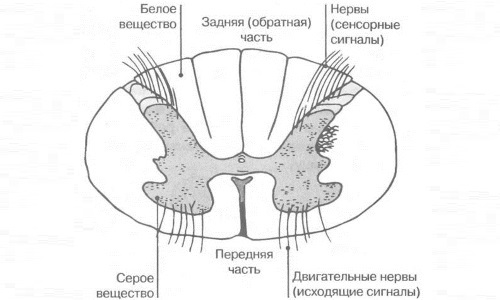 Special shell lot of 3 pieces cover the brain from the top:

The External structure of the spinal cord is different the front surface and back. The front is the front slit, located in the middle. On the back there is a groove. It divides the brain in half, symmetric among themselves.

The Brain is attached to the vertebrae by means of ligament.

a Little about the segmental structure

Across the Spinal cord itself is divided into segments – the special departments. The structure of the segment is such that each face of the 2 front and 2 rear spine. These roots are responsible for the interaction of the brain with various organs. 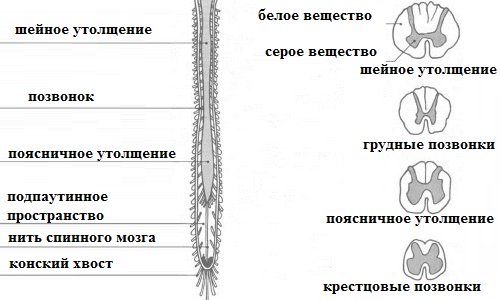 Roots from the front inform the brain about physical activity. They force to contract muscle tissue. Motor is their second name. The roots of the rear part are connected with receptors that tell them about the sensation. This information roots is delivered to the brain and spinal column. The name is sensitive.

each person Has the following number of segments:

According to the structure of the segment, anterior and posterior roots of them go to the intervertebral hole. The direction they are different: in the neck area – the horizontal area of the chest is oblique, and the loins and the sacrum is vertical.

The Spinal cord has a spine length. Therefore, the distance between the roots and vertebrae are different: the most small in the neck, large in the lumbosacral region.

Every segment is responsible for the allocated responsibility of certain parts of the body both outside and inside. This feature of the structure of the segment gives the doctor the best chance of diagnosis of a developing pathology. 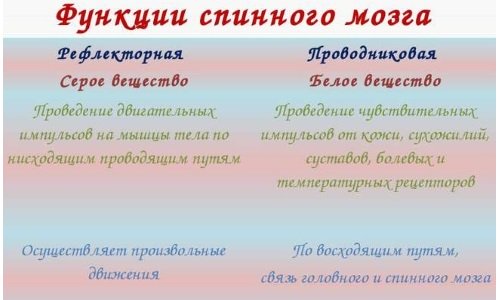 for example, the sensitivity of the skin in the navel area responds to the 10th thoracic segment. If the external touch to this site does not cause any sensations, you can concludethat in the brain, spinal column, below the 10th segment, started pathological changes.

The Internal structure of the spinal cord is not a homogeneous structure. Its Central part consists of a substance called gray. And what is on the edges, white is called.

If we consider the brain in the slice, the gray matter will look like a butterfly. Another comparison: it is like the horn, front, rear and side part.

In the place of the substance, where looked through the "horn" side, are located vegetative centers. Where seen "horns" in the front, there are bodies of neurons are responsible for movement. And in the rear "horns" – the bodies of nerve cells responsible for sensitivity.

White matter across its volume crossed by some fibres. They form the paths along which flow the centrifugal impulses of the nervous system. They also created their nerve bundles, and connections between segments.

The Internal structure provides for a channel, called Central, as it is centered.

It contains the cerebrospinal fluid. She plays nutritive function. It participates in metabolic processes of the body.

This body has 2 main functions: reflex and conductor.

The first Task is to respond to stimuli. For example, a person touched something too hot. He immediately pulls back his hand. This is called reflex. Second example: in the throat gets a foreign body. There comes a cough, which is also a reflex. A lot of daily human actions is a reflex to external stimuli. And they depend on brain, located in the spine.

Reflex is the body's response to some irritation. In the example at hand the explanation looks like this. On the skin are the receptors. They are susceptible to changes in temperature. Once a person has touched something hot, the receptor starts to operate. From him the impulse to the brain back. There he makes the motor neuron involved in the work. Thanks to him, start acting muscles. And there is the body's response to burns: the man pulls back his hand.

With conductive features associated with the momentum transfer from the periphery to the center and Vice versa. Located in the white matter of the brain back conductors capable of transmitting the necessary information in any direction: upwards and downwards. For example, a man stroking a furry animal. He formed a sense of softness and warmth. The impulse is transferred to the brain of the head from the external environment through the brain back. If the link is broken between two brains, we lose the sensitivity.

Not only touch create the momentum coming into the brain. This happens for many reasons: as far as tense muscles, what is the position of the body where it hurts and more.

The signals in a top-down path, allow the brain to direct the human body. For example, the man decided to catch the bus that will depart from the stop. The brain transmits information in the dorsal, which includes in work the right muscles.